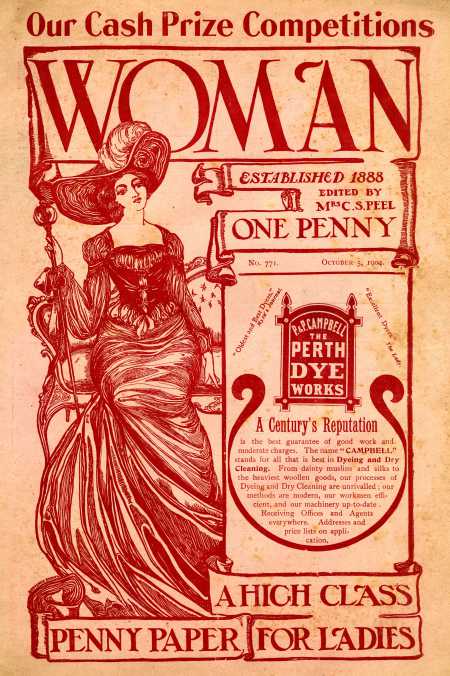 [NOTE: Woman (1888-1907) had a reputation for being “advanced,” probably because it published interviews with New Woman writers like Mathilde Blind,[1] but it was in fact a socially conservative magazine, describing itself on its frontispiece page as “a journal of information, entertainment and practical counsel for womankind the wide world over.” Arnold Bennett edited the magazine starting in 1894 and wrote under several pseudonyms, and he wrote an extremely favorable review of Blind’s last volume of poetry, Birds of Passage: Songs of the Orient and Occident, under the pseudonym “Barbara” in the 22 May 1895 issue of the journal.[2]]

Everyone at all familiar with the current thought and literature of the day knows the name of Mathilde Blind. The admirable Life of Madame Roland, written by her for the “Eminent Women Series,” has been widely read, and is certainly the most graphic and accurate picture of the great revolutionary heroine ever penned in England, or, for that matter, in France.

Tarantella, a quaint, weird story, full of imagination and suggested thought, made her name even more widely known, but it is as a poetess that Miss Blind has scored her greatest triumphs. Her first collected volume of verses was published in 1881, and made an instant mark, many of them becoming rapidly popular. “The Heather on Fire,” “The Sower, “The Dead,” and “The Street Children’s Dance,” are even now being constantly reprinted wherever the English language is read and spoken throughout the world. But the poem which Miss Blind considers her magnum opus is “The Ascent of Man,” at which she has worked more or less all her life, and which has for [its] object the description and explanation of the gradual evolution of humanity.

Another proof of Miss Blind’s versatility has come before the world this spring in the spirited translation into English of Marie Bashkirtseff’s Journal, that strange laying bare of a woman’s soul, only to be compared in its nude intensity to the confessions of Jean Jacques Rousseau and Le Journal des Goncourts.

On the mantel-piece of her pretty sitting-room, on the desk where she works, are many characteristic photographs of the wayward brilliant Russian girl whom Miss Blind has made so real to us.

“What first made you think of translating the Journal of Marie Bashkirtseff?”

“I was in Nice, and called on Madame Bashkirtseff. She gave me the manuscript of her dead daughter’s diary, and I was immensely struck by the power and originality of the writing. The more I read, the oftener I re-read, and the more I was impressed; in fact, I have gone through word by word the Journal four times, and it had the same fascination for me the last time as the first. I think that people speak a little hardly sometimes of poor Marie. She was still a child, still developing intellectually and morally. She would have been a very different woman at thirty.”

“And which women have most influenced you? Who do you place first?”

“George Sand is my favourite author, then George Eliot and Elizabeth Barrett Browning. Of course,” continues Miss Blind smiling, “Sappho ought to have been named first.”

“Ah, yes, Madame Roland has had a great influence over me. Her noble life and romantic career so impressed my imagination when I was a young girl, that I announced to my mother that in future I would eschew balls and parties, give up going to the play, in a word, imitate my heroine as closely as possible. I think that every girl ought to read Madame’s Roland’s writings, they are full of high aspiration and noble purpose. Talking of women, I must not forget Madame de Sévigné, whom Sainte-Beuve named with Molière and La Fontaine the great literary classics in France. Then, of course, Charlotte and Emily Brontë stand alone and will stand to all time in English literature. I am also much attached to Miss Austen; she had to a supreme degree what women sometimes lack, perfection of form combined with a sense of humour.”

“And what do you think of literature as a profession?”

“I cannot help thinking that nowadays people write too much. Literature is the only profession for which no special training is supposed to be required. A man writes an article to earn twenty pounds, and when a lady has nothing better to do, she says,” ‘I will sit down and write a novel!’ But I do not believe that this state of things will last. The monster lending-library system will pass away, and the young ladies who now requires as mental pabulum perpetual three-volume novels of a certain kind will ask for very different mental food when more thoroughly educated.”

“Then you entirely sympathise with the higher education of women?”

“Certainly I do. I think education more important than any other reform. Let that come, the rest will follow. I look forward to seeing women do all that man has done. The sexes ought to be equal in every sense. Women ought to have the same education, and share the political responsibilities of men. But it is sad to note how gifted women overwork themselves—sometimes to death. They take no relaxation, but go plodding on till obliged to stop altogether, and cease working for a long period.”

“Do you think that the modern system of college training will tend to produce women as remarkable as those who have gone before, or only level up all womanhood?”

“Both. I feel sure that women quite as remarkable as their precursors will arise, and all women will have a fairer and better chance in the race. There is, however, one great difference between the clever modern woman and her brilliant sister of the old régime. Now, she who is ambitious to make a dent on the world’s surface, writes, speaks, and acts independently, by herself. In old days man was the material which the clever woman moulded as a potter does his clay, this way and that, and through whom she attained influence and posthumous fame.”

“Just now the future of woman is occupying everybody.”

“Yes, a little too much so, I think; the subject will hardly bear so much discussion.”

“Well, I consider that the theories he advocates are amply refuted by the family history of the world’s geniuses. It is rare indeed that talent is hereditary, even under the most favourable conditions. To quote but one instance, Percy Bysshe Shelley, one of the greatest poets the world has ever seen, married the daughter of Godwin and Mary Wollstonecraft, herself a most remarkable woman, and their son is—Sir Percy Shelley; a good and kindly man, but as different from anything that might have been expected as it was possible to be. By-the-by, I should like you to say that I have a great and heart-felt admiration for Mary Wollstonecraft. She was the first woman who wrote for women and upheld their rights. I do not think that she is appreciated as she ought to be.”

[1]. On the emergence of the personal interview in late-Victorian journalism, see Rosemary T. VanArsdel, “Women’s Periodicals and the New Journalism: The Personal Interview,” in Papers for the Millions: The New Journalism in Britain, 1850-1914, ed. Joel H. Wiener (New York: Greenwood, 1988), 243-55.

[2]. “Miss Blind sings in many modes-—she is probably more various than any other woman-poet in English literature,” Bennett writes, “and in all her songs there is an original, intimately personal accent which one can catch, but not imprison within a paragraph.” Bennett adds that Blind “excels in lyric verse,” noting that “‘Prelude’ and ‘A Fantasy,’ especially the former, are distinguished achievements, and they show, I think, a more complete technique than anything even in Dramas in Miniature.” While admiring the “Songs of the Orient” in the volume, Bennett concludes that “for myself I would rather have her sing of England. Take the fine poem ‘Noonday Rest,’ written on Hampstead Heath under the willows–‘Sometimes they lose a leaf, which, flickering slow, / Faints on the sunburnt leas.’ How wonderfully the one word which I have italicized suggests the intolerable heat of a scorching noon! This poem is perhaps the best in the book, a book that contains nothing trivial, nothing shallow, nothing that is not poetry.”