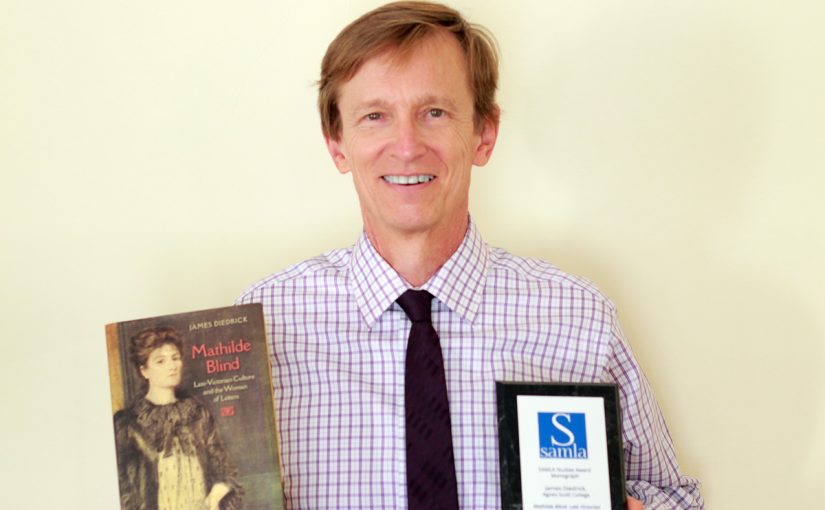 In making the award, Adam Wood, Chair of the SAMLA Studies Book Award, had this to say about the book:

“James Diedrick in Mathilde Blind: Late-Victorian Culture and The Woman of Letters provides a highly readable biography of an important but overlooked intellectual of the late-Victorian era. His thoroughly researched book illuminates  politics and history as it shows Blind’s multi-genre literary influence. This biography sheds new light on writers and a time period that we thought we knew well.”

Photos of the award presentation:

Linda Wetherall reviewed Mathilde Blind in the Fall 2017 issue of The Victorian Periodicals Review (pp. 666-69).  I am happy to see the book reviewed here, since Victorian periodicals provided both a home and proving ground to Mathilde Blind as she was establishing her reputation as a cosmopolitan woman of letters. In fact, this is something I discuss in one of my first essays on Blind, which  appeared in the VPR in 2003 (“A Pioneering Female Aesthete: Mathilde Blind in the Dark Blue“).

Wetherall’s review begins with this assessment and overview:

The biography is a pioneering work that uses periodical reviews of Mathilde Blind’s literary works, as well as letters from her circle of friends to create a highly detailed account of her life. Diedrick, who has spent nearly two decades meticulously researching Blind’s life, . . .  identified two main goals for this biography. First, he aimed to show that “Blind’s story has a historical as well as literary significance, illustrating the complex affiliations linking radical thought, revolutionary politics, and aestheticism in the mid- to late nineteenth century” (xii). Diedrick’s second goal was to demonstrate how “feminist theory and theories of cosmopolitanism” are “rooted in and linked to Victorian discourse—on aesthetics, citizenship, nationhood, imperialism, gender, and sexuality—and how Blind herself contributed to this discourse” (xii). Diedrick succeeds in accomplishing these goals through the passionate and thorough research encompassed by this 336-page biography.

She concludes her review thus:

As Blind’s first biographer, Diedrick undoubtedly had a challenging task before him. But this book skillfully balances extensive historical research into Blind’s life and the lives of those within her social circle with thoughtful and thorough literary analysis of her writing and critical reception. Furthermore, this biography contains a wealth of information on late Victorian periodicals for scholars interested in feminism, aestheticism, and cosmopolitanism, as well as contemporary critical reactions to those ideologies and movements. Mathilde Blind is a welcome addition to the scholarship on women writers and intellectuals at the fin de siècle.

Victorian Periodicals Review is published by the Johns Hopkins University Press. For access to the full review and information about the journal go to: https://www.press.jhu.edu/journals/victorian-periodicals-review 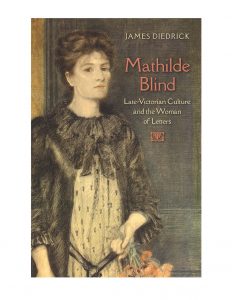 I am pleased to announce the publication of Mathilde Blind: Late-Victorian Culture and the Woman of Letters, available from the University of Virginia Press, both in hardcover and as an ebook. The book is copyrighted  2016, and was released in December.

Blind (1841-1896), a German-born, Anglo-Jewish British poet, biographer, novelist, translator and essayist, was a freethinking radical feminist who helped shape late-Victorian literary culture in London and beyond. By the time she was 30, Blind had become a pioneering female aesthete in a mostly male community of writers, painters, and critics, including Algernon Charles Swinburne, William Morris, Ford Madox Brown, William Michael Rossetti, and Richard Garnett. By the 1880s she had become widely recognized for a body of writing that engaged contemporary issues such as the Woman Question, the Highland Clearances, and Darwin’s evolutionary theory.

She subsequently emerged as a prominent voice and leader among New Woman writers at the end of the century, including Mona Caird, Rosamund Marriott Watson, and Katharine Tynan. She also developed important associations with leading male decadent writers of the fin de siècle, most notably, Oscar Wilde and Arthur Symons.

Despite her extensive contributions to Victorian debates on aesthetics, religion, nationhood, imperialism, gender, and sexuality, however, Blind has yet to receive the prominence she deserves in studies of the period. As the first full-length biography of this trailblazing woman of letters, Mathilde Blind underscores the importance of her poetry and her critical writings (her work on Shelley, biographies of George Eliot and Madame Roland, and her translations of Strauss and Bashkirtseff) for the literature and culture of the fin de siècle.

Mathilde Blind is a groundbreaking critical biography of the German-born British aesthete. It is more than just a fascinating account of Blind’s life as a freethinking radical feminist in late-Victorian London—it is a book that underscores the importance of her poetry and her critical writings for the literature and culture of the fin de siècle. This literary biography shows that her work was at the heart of the late-Victorian turn to the republican politics and aesthetics of Romanticism. An important, must-read book. –Ana Parejo Vadillo, Birkbeck University of London, author of Women Poets and Urban Aestheticism: Passengers of Modernity

This groundbreaking study of Mathilde Blind is a must-read for all who are interested in aestheticism, nineteenth-century women’s studies, Victorian poetry, radical politics, transnationalism, and publishing history. An immigrant with deft command of English, a poet equally at home in delicate lyrics and bold narratives, a beautiful woman who attracted men but also gravitated toward desire for women, Mathilde Blind defies easy categorization. The depth of James Diedrick’s research and the figure he reveals alike dazzle. –Linda K. Hughes, Texas Christian University, author of The Cambridge Introduction to Victorian Poetry