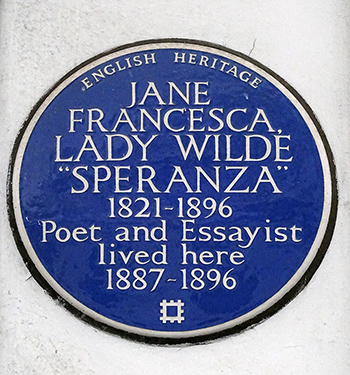 [NOTE: Oscar Wilde scholar Michael Seeney (From Bow Street to the Ritz: Oscar Wile’s Theatrical Career from 1895 to 1908; More Adey: Oscar Wilde’s Forgotten Friend) has granted me permission to publish this letter from his personal collection of late-Victorian literary manuscripts. While Blind’s acquaintance with Oscar Wilde is well known (he commissioned her to write the two-part essay on the painter Marie Bashkirtseff that led to her translation of Journal de Marie Bashkirtseff, which became a sensation during the fin-de-siècle), this is the only letter indicating that she also knew and admired another member of the Wilde family–Wilde’s mother. Born Jane Francesca Agnes in 1821, she became Lady Wilde in 1864, when her husband, the surgeon Dr. William Wilde, was knighted for his involvement with recording births and deaths in Ireland. Like Blind, her political radicalism was forged in the revolutionary fires that swept through Europe in the late 1840s; in 1846, she began contributing poetry and prose to The Nation – the journal of Young Ireland, a revolutionary movement for Irish independence from England. In 1847 she published her most famous poem, “The Brothers,” a lament for the two leaders of the 1798 Rising that was turned into a popular Dublin street ballad. In addition to poetry and journalism she wrote extensively about Irish folklore (her book Ancient Legends, Mystic Charms, and Superstitions of Ireland appeared two years before Blind wrote to her). The same month she sent the letter below Blind’s fourth volume of poetry, The Ascent of Man, appeared in London bookshops, so presumably these are the “poems” she refers to sending “by way of greeting.” The blue plaque above was erected in 2000 by English Heritage, and is located at 87 Oakley Street, Chelsea, London, SW3 5NP.]

I have been wishing to come & see you but my frequent absences from town & the great distance from my abode to yours have always hitherto prevented me from doing so.1 Though I hope to have the pleasure of calling on you before very long I send you my poems in the meanwhile by way of greeting.

Your warm & generous appreciation of my work has always been very encouraging to me amid much in this world that is painful & chilling.