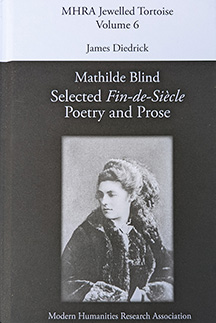 While annotating Mathilde Blind’s last three volumes of poetry for the Jewelled Tortoise series of fin-de-siècle texts, I was struck by the ways in which Blind structured each book so that the whole is greater than (or extends the implications of) the sum of its separate parts. Below are slightly revised passages from my introduction to Mathilde Blind: Selected Fin-de-Siecle Poetry and Prose that describe her arrangement of the poems in volume (for a more detailed discussion, complete with full citations, see the entire “Introduction” on pages 1-46).

The Ascent of Man consists of three sections–the title poem, “Poems of the Open Air,” and “Love in Exile.” The poems in the latter two sections exist in an implicitly dialogical relationship to the title poem. Most of the verses in “Poems of the Open Air” hearken back to (and elicit nostalgia for) a pre-Darwinian conception of nature (as the epigraph from Coleridge that heads the section suggests). In so doing they invite the reader to confront the epistemic shifts that occurred in the long nineteenth century when pantheistic visions of nature gave way to scientific perspectives. As Blind put it in Shelley’s View of Nature Contrasted with Darwin’s, she and her late-century contemporaries were forced to acknowledge “the oppression, strife, and cruelty, which seem to pervade all organic beings according to that dread law formulated by Darwin: ‘Let the strongest live and the weakest die”’ (p. 243). The sequence of poems in the ‘Love in Exile’ section, which includes twenty numbered poems subtitled ‘Songs’ followed by four individually titled lyrics, registers this seismic cultural shift through intimate expressions of personal loss. This section begins with an epigraph from Tennyson’s In Memoriam A. H. H. (1850), whose famous phrase “Nature, red in tooth and claw” anticipated the troubling implications of Darwin’s theory. Tennyson’s poem grieves both the loss of a loved one and of faith in a benign universe, and thus Blind’s allusion to Tennyson in the final section of The Ascent of Man is doubly appropriate. The lyrics in “Love in Exile” give voice to feelings of isolation, exile, and unrequited love that echo those of Tennyson’s lyric speaker. They also implicitly link these personal griefs to broader cultural dislocations engendered by an increasingly naturalistic world view.

This volume is divided into two sections, the first labelled “Dramas in Miniature” and the second “Lyrics.” By subsuming both her “dramatic” and “lyric” poems in a volume titled Dramas in Miniature, Blind is intentionally blurring the distinction between these two poetic genres. In effect, she is inviting her readers to think of all these poems as what Monique Morgan calls “‘lyric narrative hybrids.” Isobel Armstrong’s concept of the ‘double poem’ is also relevant here — a poem in which the speaker’s utterance is always also “the object of analysis and critique. It is, as it were, reclassified as drama in the act of being literal lyric expression.” In this regard it is worth noting that its position as the last “drama” of the first section allows “Scherzo” to function as a kind of bridge to the “lyrics” that make up the second. A monodrama of female erotic desire, ‘Scherzo’ in one sense fully embraces the Romantic tradition of direct subjective expression. It begins with a direct expression of the speaker’s desire for the presence of a lover: “Oh, beloved, come and bring | All the flowery wealth of spring!” (p. 172). But in the second half of the poem, this speaker relates the story of Diana’s love for Endymion as a way of validating this desire. Blind thus makes use of narrative and dramatic elements that serve to “objectify” the speaker’s lyric effusion.

As Carol Christ notes, Victorian (and Modernist) poets reacted against the subjectivity they associated with Romanticism “by attempting to objectify the materials of poetry,” often turning to “structures of myth and history which provide a narrative that contains and gives significance to personalities.” Of the fifteen “lyrics” in the volume three are narratives or include narrative elements; one (“A Child’s Fancy”) contains dialogue; and many rely on metaphorical indirection to express the speaker’s feelings, from the use of vividly detailed landscape tableaux, to comparisons of the speakers to sleepwalkers, Tantalus, even a viola d’amore. Furthermore, the lyrics in this section employ a wide array of metrical patterns and verse forms, including iambic and trochaic dimeter, trimeter, tetrameter, and pentameter; quatrains, quintets, sexains, octets, and Spenserian stanzas, which foreground the formal qualities of each poem. Indeed, one of these lyrics, a sonnet, is titled “Sonnet,” verbally objectifying its form.

This “Sonnet” alludes to Shakespeare’s sonnet 18, whose speaker assures his beloved that “thy eternal summer shall not fade” thanks to his immortalizing verse, which will live “So long as men can breathe or eyes can see.” The speaker in Blind’s sonnet, seeking to “shield” the beloved “from time’s fraying wear and tear,” asks “How save you, fairest, but to set you where | Mortality kills death in deathless art?” (p. 176).  Like many of the “lyrics” in the section, this poem registers Blind’s acute awareness of the tradition of English lyric poetry in which she is writing. Some ten months before she published Dramas in Miniature, Blind’s friend and fellow poet Edmund Gosse published the essay “Is Verse in Danger?” Gosse writes that contemporary poets are so haunted by the poets of the past that the “activity of the dead is paramount and threatens to paralyse original writing altogether,” adding that many “suggest that poetry has had its reign, its fascinating and imperial tyranny, and that it must now make way for the democracy of prose.” But Gosse goes on to assert the vitality of verse, and speculates that the “poetry of the future” will represent more successfully than fiction the nature of human consciousness, those “ephemeral shades of emotion which prose scarcely ventures to describe,” those “divisions and revulsions of sensation, ill-defined desires, gleams of intuition and the whole gamut of spiritual notes descending from exultation to despair.” Because “untroubled by the necessity of formulating a creed, a theory, or a story,” this poetry “will describe with delicate accuracy, and under a veil of artistic beauty, the amazing, the unfamiliar, and even the portentous phenomena which it encounters.” Gosse could here be describing the poems in Dramas in Miniature.

Birds of Passage: Songs of the Orient and Occident (1895)

Birds of Passage is divided into five sections: “Prelude,” “Songs of the Orient,” “Songs of the Occident,” “Shakespeare Sonnets,” and “Miscellaneous Pieces.” Because of its musical connotations, “Prelude” may seem to apply only to the second and third sections. In fact, it frames the entire volume, both in its imagery and themes. Most importantly, the literal avian migration that is the controlling imagery in the poem — the “passage” from one region to another, followed by a return — becomes a metaphor for a cosmopolitan vision and a transnational impulse the entire volume embraces. So too does the poem’s celebration of the “undaunted wing” of the birds’ journeys as they “face the fluctuant storm‐winds and the elemental night” express the volume’s embrace of both imaginative risk-taking and acceptance of fate. The final stanza of the “Prelude,” with its reminder of personal mortality, anticipates the final two poems in the volume’s final section. The “Prelude,” along with the poems “Rest” and “Mystery of Mysteries,” are fittingly valedictory expressions of Blind’s antitheism and aestheticism (she died a year after this volume appeared), and a reminder that, like her friend Helen Zimmern, she was a close reader of Nietzsche. Nietzsche expressed his conception of amor fati (love of fate) in terms that describe the sensibility everywhere apparent in Birds of Passage: “I want to learn more and more to see as beautiful what is necessary in things; then I shall be one of those who make things beautiful. Amor fati: let that be my love henceforth! I do not want to wage war against what is ugly. I do not want to accuse; I do not even want to accuse those who accuse. Looking away shall be my only negation. And all in all and on the whole: some day I wish to be only a Yes-sayer” (from The Gay Science, originally published in 1887 as Die fröhliche Wissenschaft, and sometimes translated as The Joyful Wisdom or The Joyous Science).