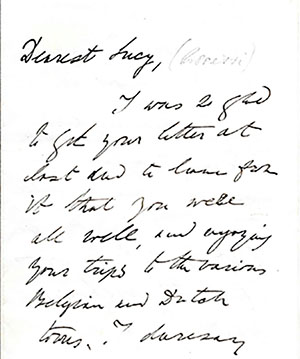 Today a new section of the website has been added, featuring letters from Mathilde Blind to various correspondents. The first of these, in chronological order, is her first known letter to her contemporary and friend Lucy Madox Rossetti (see excerpt above), part of Oscar Wilde scholar Michael Seeney’s personal collection of late-Victorian literary manuscripts.

The next set of excerpts come from a series of letters Blind wrote in 1873 to her friend Richard Garnett, then Assistant Keeper of Books in the British Library, while on an extended visit to the Hebrides archipelago on the west coast of Scotland. These letters are of particular interest because three of Blind’s poems–“The Prophecy of St. Oran,” The Heather on Fire, and “The Ascent of Man,” drew inspiration from this trip.

The 1889 letter is the only known letter from Blind to Lady Wilde, Oscar Wilde’s mother, born Jane Francesca Agnes in 1821 (she became Lady Wilde in 1864, when her husband, the surgeon Dr. William Wilde, was knighted for his involvement with recording births and deaths in Ireland). This letter is also reproduced thanks to the generosity of Michael Seeney, who has granted me permission to publish it here along with the letter to Lucy Rossetti.

The individual letters and excerpts:

—Dispatches from the Isle of Skye, August-September 1873

—Visiting Iona, the setting of “The Prophecy of St. Oran,” September 1873