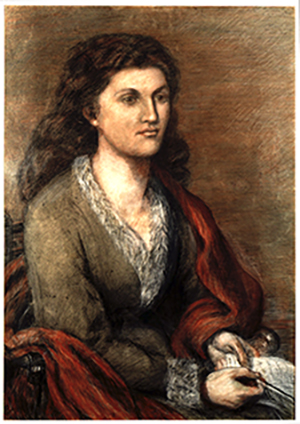 [NOTE: Oscar Wilde scholar Michael Seeney (From Bow Street to the Ritz: Oscar Wile’s Theatrical Career from 1895 to 1908; More Adey: Oscar Wilde’s Forgotten Friend) has granted me permission to publish this first known letter from Blind to her contemporary and friend Lucy Madox Rossetti (née Brown), part of his personal collection of late-Victorian literary manuscripts. The two women originally met in the late 1860s at the home of Lucy’s father, the painter Ford Madox Brown, whose weekly “at home” events drew some of London’s leading writers and painters. Contemporaries and kindred spirits, they were united by their radicalism: both were bohemians, feminists, and antitheists. Lucy’s 1874 marriage to Blind’s friend William Michael Rossetti brought them even closer–at least until Blind’s increasingly close relationship to Ford Madox Brown created conflict within the Brown family.

Lucy’s 1872 colored chalk portrait of Blind, reproduced at the top of this page, combines the qualities evident in the studio portrait taken around this time—striking beauty, aesthetic dress, intellectual intensity—with a symbolic emphasis on Blind’s vocation. She is seated in an ornate Victorian chair, a quill pen in one hand and several sheets of manuscript filled with her handwriting in the other. Blind’s face, upper body, and hands fill the frame, and Brown’s visual style evokes an almost sculptural sense of monumentality. It is now hanging at Newnham College, Cambridge, where Blind would leave the bulk of her estate to establish the “Mathilde Blind Scholarship,” awarded to novelist Margaret Drabble among many others.

The letter below indicates an intimacy with Lucy that would be tested in the 1880s (see Mathilde Blind: Late-Victorian Culture and the Woman of Letters).]

I was glad to get your letter at last and to learn from it that you were all well and enjoying your trips to the various Belgian and Dutch towns. 1 I daresay the Hague is a charming place from all I have heard and read of it. — Now I suppose you are back in Euston Square, and I hope I shall be able to come and see you tomorrow afternoon if it is not too wet. Isn’t this wretched weather?

I read with much interest Mr. Rossetti’s description of ‘La Maison Leys” in the Academy, 2 I was somehow reminded by it of that Flemish house in “La Recherche de L’Inconnu” by Balzac, which stands out in the memory with the vividness of an actual sense impression. 3