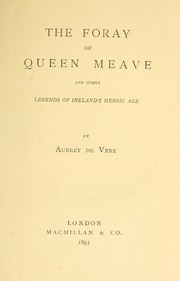 [This review can be compared to Blind’s 1872 Athenaeum review of William Morris’s Review of Love Is Enough; or, the Freeing of Pharamond: A Morality.]

In this volume Mr. De Vere attempts to do for the heroic lore of the Celt what Mr. William Morris has successfully accomplished for that of the Teuton. His chief poem substantially embodies the story told in the ‘Tain bo Cuailgné.’ This tale—held by some scholars to be the great Irish epic of ancient times, while others believe it to be only the fragment of a larger work—is to early Irish literature what the ‘Story of the Volsungs and the Niblungs’ is to that of Scandinavia. It is curious to note the points of similarity and contrast between two such representative works. The ideal of an heroic age assumes naturally much the same shape in every race and country, and it cannot surprise us, therefore, that there should be something of a family likeness between the Norse and the Gaelic chieftains. Cuchullain is the Irish Sigurd. From childhood he shows a genius for fighting, coming by his weapons much in the same fashion as the hero of the Volsunga Saga; for while Sigurd alone of men succeeds in welding the shards of the sword Grani, Cuchullain, on being knighted when a mere stripling, snaps every sword and lance in two till the King of Uladh (Ulster) is fain to give him his own arms and chariot. But in spite of this resemblance between the leading characters, the two stories are widely dissimilar. The passion and the tragic intensity of the old Norse tale are lacking in this Gaelic tradition as well as a central idea which should make of it an artistic whole. This was exactly where the modern poet could have developed whatever power of dramatic imagination he possessed; for by weaving the various elements of the legend skilfully together Mr. De Vere might have produced a really fine poem. Unfortunately he lacks the gift of selection and condensation, and has contented himself with putting the fragments of the old epic into easy and fluent verse.

‘The Foray of Queen Meave,’ the most important poem in the volume, is the story of the war between Uladh and Connaght (Connaught). It consists of five fragments and begins with a conjugal dispute between the Queen of Connaght and her feeble husband Ailill, each claiming to be the wealthier and more powerful. The lords declare that they are equally great in all respects save one—that is, the possession of the white bull Fionbannah, which turns the scale in favour of Ailill. This so incenses the queen that she determines to go to war with the King of Uladh in order to obtain his black bull Donn, which is a still mightier beast. Unless Mr. De Vere wished to write a serio-comic poem, should he not have modified or changed the motif of the old legend so as to bring it more within the range of modern sympathies? As it is, an element of unconscious comedy lies at the very heart of his work; for however poetic it may be to make a supremely beautiful woman the origin of a great war, the idea of two nations butchering each other [526] for the sake of a bull could only serve as a theme for satire. Mr. De Vere, however, describes the incident with imperturbable gravity. Queen Meave, wilfully bent on the attainment of her object, marches with a large host to the borders of Uladh. Magic and witchcraft, which play a large part in these Irish traditions, come to her assistance; for the witch Faythleen lays a ban of imbecility on the people of Uladh, so that instead of going to meet their enemy they are befooled by dreams. Cuchullain is the only man in the realm prepared to meet the advancing host, and the queen engages that the warfare shall for the present be restricted to a combat between himself and a single champion. When Cuchullain has slain ninety of her men, the queen, following the advice of the magician Cailitin, invites Ferdia to a feast; for this great warrior, Cuchullain’s dearest friend, is the only man by whom the hero may be overcome. At the banquet Ferdia is placed by the side of the queen’s daughter, the beautiful Finobar. The princess, versed in all the arts of fascination, sits whispering beside him to the music of harps:—

“I love not songs of love!
Better the war-song! Best, methinks, of all
That lullaby half war and sorrow half
Breathed by some bride while o’er her wounded lord
Softly descends the sleep:—so softly sank
Cold dews of evening on this flower still wet!”
She took it from her breast and held it near:
He smelt it; kissed it; kept it. With a smile
She added: “For your sister? Have you one?
If so, ‘tis likely she resembles me:
They chide me oft: ‘No Gaelic face is thine,
Dark-eyed, dark-browed, a rebel since its birth.’”
She ceased; again she spake: “ Even now, methinks,
That lullaby I spake of I can hear!
Is it for thee, my friend, or Cuchullain?”
That hand, of flower amerced, drew nearer yet
To his. That smile had passed. Tearful she turned
On him those luminaries of love and death,
Her eyes, like stars in midnight waters glassed;
Turned them, but spake no longer.

The noble Ferdia cannot resist those eyes; and when the queen offers him her daughter’s hand if he will meet Cuchullain in mortal combat, love overcomes friendship. On the first day, when Cuchullain and Ferdia stand confronted as enemies, their hearts still yearn tenderly towards each other, and the close of that unnatural strife the friends draw near and throw their arms round each other’s necks. On the second day they fight with more heat, yet on its cessation still share meat and drink together; but on the evening of the third day the excitement of battle effaces all earlier memories and they turn away haughtily from each other when it is over. The fourth day they meet unrelentingly, determined that one or both must die. The combat rages wildly between them, sometimes one, sometimes the other gaining an advantage; but at last the “madness-rage” descends upon Cuchullain, and, hurling the Gae-Bulg (a huge missile which no one else can wield) on Ferida’s breast, he smites him dead. No sooner has his friend fallen than Cuchullain’s old affection for him reawakens in full force. Overcome at once by his wounds and grief he feels, he faints away, and lies long like one that is dead.

This episode, which occurs in Fragments III., is by far the finest in the book. Not only is the situation at once grand and pathetic, but the verse gains a strength and fire for which it would be difficult to account did not the author himself explain that this is the only portion of his work which contains some translations from the original. Here, indeed, we catch a far-off sound of the spirit of ancient Gaelic poetry—a blending of tender sentiment and sadness with a touch of that natural magic which, Mr. Matthew Arnold tells us, is peculiar to the Celt. Thus the element of Cuchullain over Ferdia, which seems evidently adapted from the ‘Tain,’ has an echo in it of the old heroic tale:—

Ultimately Cuchullain, who, after a long trance, has been healed by ministering spirits, suddenly bursts upon the combatants after the hosts of Uladh have been routed. He utterly defeats Queen Meave, drives her across the Shannon, and, when some of his men would slay her, magnanimously saves her life, crying:—

One day I shared her feast: she shall not die!

The same merits and defects which mark ‘The Foray of Queen Meave’ are still more noticeable in the two shorter poems, ‘The Sons of Usnach’ and ‘The Children of Lir.’ Mr. De Vere’s verse is invariably easy, graceful, and refined, but, unless when reflecting the afterglow of the old bardic fire, sadly wanting in genuine inspiration. Especially in ‘The Children of Lir’ the descriptive passages are Mr. De Vere’s strong point, although his illustrations taken from nature seem frequently forced and artificial. “A breeze-like step,” “Sparkling like a flower,” “lids of snow,” are conventional expressions which convey an untrue image of the object they describe. These, however, are mild similes compared to such daring flights as—

From the wan browns the horror-stricken hair
Bickering like meteors rose, or seemed to rise.

In his narrative Mr. De Vere is constantly diffuse where he should be brief, and occasionally brief where we require a fuller analysis of the situation. Thus in’ The Sons of Usnach’ a young warrior, for the first time meeting a maiden destined to marry old King Conor, makes love in this startling fashion:—

Then, for the maiden’s safety fearing,
With passion changed continued: “Spurn my suit!
The king will slay thee!” She, the warrior nearing,
Held forth both hands, and gazed upon him mute;
And last, in love’s high truth–and truth is best–
Made answer, “Thine!” He snatched her to his Breast.

In ‘The Children of Lir’—a Celtic adaptation of the well-known fairy tale of children changed to swans by sorcery—Mr. De Vere is, on the whole, happier in his descriptions than in ‘The Sons of Usnach.’ The tender fancy of this touching legend, in which weird pagan traditions are absorbed in the dawn of Christianity, suits the author’s vein better than the more tragic spirit of the other story. Mr. De Vere’s sympathy with Roman Catholicism gives to this part of his volume a peculiar sincerity of tone, his most impressive work consisting, indeed of some religious poems addressed to the Virgin Mary published in an earlier volume of verse. The two narrative poems last mentioned are written in the six-line stanza, structurally the same as that used by Shakespeare in ‘Venus and Adonis.’ This meter, admirably adapted for narrative poetry, although used by Mr. De Vere with much fluency, is never in his hands wielded with the vigour and terseness of which it is capable at its best. Indeed, he is more successful in his handling of blank verse, especially in certain portions where it seems to rise and be sustained by the greater elevation of the narrative.

On the whole, this volume may be read with considerable interest by lovers of ancient Irish legends, with which the public is as yet but little familiarized. We cannot help hoping, however, that the quarry of Ireland’s heroic age, which Mr. De Vere describes in his preface as peculiarly rich in materials, will by-and-by be opened by a poet whose creative gift may enable him to refashion a poem of truly human interest from the primitive lore of the past.