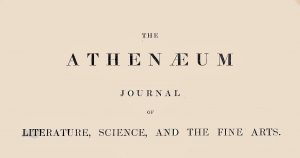 [NOTE: Mathilde Blind and her fellow “Shelleyites’ were rightfully suspicious of this three-volume edition of The Poetical Works of Shelley (here she is reviewing the second volume). Though the editor is nowhere named, the initials “R.H.S.” at the end of the preface indicate that the compiler and editor (or “re-editor” as William Michael Rossetti calls him in his dismissive 28 February review for the Academy) was Richard Herne Shepherd, who made his living editing publishers’ editions of works by Blake, Shelley, Lamb, Poe, Tennyson, Dickens, the Brownings, and others. Blind begins by calling  the first volume in the series (which contains the “Posthumous Fragments of Margaret Nicolson” and other juvenile productions) “worthless.” As for the editor’s claim that “Laon and Cythna” in the present volume “is at last given to the world as [Shelley] first wrote it,” this exaggeration “is calculated to put one on the defensive as far as the entire edition is concerned.” Rather than dwell on the defects of the texts as Shepherd has “re-edited” them, however, Blind devotes most of her review to a discussion of “Laon and Cythna,” which Shelley’s original publishers refused to print because of its theme of incest and its statements on religion. Shelley then altered and revised the poem so that Cythna is an orphan raised alongside Laon, which was published in 1818 under the title The Revolt of Islam. Because of her interest in the Tristram and Iseult story, Blind speculates that Shelley invoked incest so as to “delineate that close and profound union of two beings which must result from their having drawn the inspiration of their loftiest thoughts and actions from the same sources of beauty in nature and Art, and thus being eminently fitted to feel for each other that intellectual love which is, according to Spinoza, the soul or religion itself.”]

To the admirer of Shelley it must always be matter of genuine pleasure when a new edition of his works is brought out, for it proves at least there is that steady element of growth in the appreciation of his writings which belongs only to the highest poetry. Nor can there be any doubt that a neat, serviceable pocket Shelley, easily accessible to the general public, has been, and, in fact, still is, a great desideratum; for the two volumes hitherto published by Messrs. Chatto & Windus, containing as they do the “Posthumous Fragments of Margaret Nicholson,” and other juvenile productions which are equally worthless, can hardly be said to fill that purpose. There is here an obvious effort to allure the public be speculating on a certain curiosity, extraneous to the subject, which cannot fail to be repugnant to the lovers of Shelley. When the editor, for example, remarks that—“The poem of ‘Laon and Cythna,’ the original version of ‘The Revolt of Islam,’ and one of the masterpieces of Shelley’s mature genius, is at length given to the world as he first wrote it,”—the exaggeration of the statement is calculated to put one on the defensive as far as the entire edition is concerned. For this statement, at least, must be taken with considerable allowance.

In the first place—with one exception, turning on the main incidents of the poem—the change made in the original version were chiefly verbal, and resolve themselves mainly into a softening down of certain expressions calculated to shock a susceptible public: thus we find “Infidel” invariably substituted for “Atheist,” “Power” and “gods” for “God”; and other variations of the same nature. Taken altogether, only fifty-five lines of the original poem were altered, and the editor overrates these alterations when he describes the present version as “mangled and mutilated.” They were made, it is true, under protest at the time by Shelley, who was naturally very indignant when he found that Ollier declined the publication of his poem, after first accepting and printing several copies of it, this leaving him no other alternative than that of mitigating the obnoxious passages. But, however reluctant Shelley might have been at the time to alter even a particle of his work, when he was forced to do so by outward pressure, it is, nevertheless, doubtful whether he subsequently would have wished ‘Laon and Cythna’ to appear in his collected works in its first shape. To judge from several slight indications, it might rather be inferred that the evidence tends in the contrary direction. Although we know that, as regards the main body of his philosophical and political convictions, Shelley’s principles remained the same throughout life, yet still it is obvious that they underwent considerable modifications, and that he would not, in subsequent years, have cared to make himself the champion of every theory forth in ‘Queen Mab’ and ‘Laon and Cythna.’ Thus, for example, in a letter addressed to John Gisborne, in 1821, he speaks half jocosely of the “furious style” of the former poem, and expresses regret at its publication by a bookseller in the Strand. Again, when writing to Ollier in the same year, he asks, “Is there any chance of a second edition of ‘The Revolt of Islam’? I could materially improve that poem on revision.” Such chance expressions, it appears to us, do not many it probable that Shelley would have been very grateful to those over-zealous persons anxious to drag every line that fell from his pen into the broad light of publicity, totally indifferent as to whether the author might not have regarded such zeal as an unpardonable indiscretion. Besides, the original text of ‘Laon and Cythna,’ or the ‘Revolution of the Golden City,’ was sufficiently accessible for all purposes of study and comparison.

We have spoken, however, of one main incident which was substantially altered in ‘The Revolt of Islam.’ The principal reason, no doubt, which induced Shelley to make Laon and Cythna brother and sister may be gathered from a paragraph in the Preface, which, as being no longer applicable, was omitted in the later editions. We there learn, from the poet himself, that his object in introducing a circumstance not a little calculated to startle and estrange the reader, was to induce a greater activity in the formation and circulation of opinions, and “to accustom men to that charity and tolerations which the exhibition of a practice widely differing from their own has a tendency to promote.”

There was, probably, another and deeper motive prompting Shelley’s imagination to this strange heresy—the wish to delineate that close and profound union of two beings which must result from their having drawn the inspiration of their loftiest thoughts and actions from the same sources of beauty in nature and Art, and this being eminently fitted to feel for each other that intellectual love which is, according to Spinoza, the soul of the religion itself. Shelley, who was never weary of dedicating his powers to the celebration of this sublime sentiment, and who was here desirous of depicting an affection, the fibres of which should strengthen with the very growth of life, was so utterly thrown off the ground of common experience in his theories of love, that when he makes such a feeling spring up between and brother and sister, he must be judged by a standard different from that which would be applied to a writer of less intense ideality. As in the change, however, which transformed Cythna, in ‘The Revolt of Islam,’ into an orphan, nurtured by the parents of Laon, and thus growing up side by side with him, the essential point of intimate comradeship was [155] left quite uninjured, we think there was less reason for restoring the original version.

Nevertheless, to the curious in such matters, the present editions will possess an attraction peculiar to itself, and, in justice to the publishers, we must add that, as regards neatness and handiness, these volumes leave nothing to be desired.