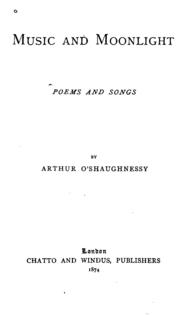 [NOTE: Arthur O’Shaughnessy was only 17 when he was appointed a transcriber in the library of the British Museum. Two years later he became a herpatologist in the museum’s zoological department. But literature was his passion, and before Music and Moonlight he had published Epic of Women (1870) and Lays of France (1872). Blind’s review was the fourth she would write for the Examiner (she also reviewed The Troubadors: Their Loves and Lyrics, Phineas Redux, The Life of S. Vincent de Paul, and Yu-Pe-Ya’s Lute: A Chinese Tale in English Verse). Blind saw O’Shaughnessy, whose verse reflects French as well as American influences, as a fellow cosmopolitan aesthete, and also as someone who, along with Swinburne, shared her belief in a poetry of ethical engagement. Although she found that lines like the following from “Europe” suffered from an “indefiniteness of outline,” she approved O’Shaughnessy’s internationalism, which he expresses by a rejection of “Polluted France” and “Spoiled” Italy and by his anticipation of “a more splendid vision, as of grand / Unanimous Europe.” This review is one of Blind’s most sustained discussions of lyric poetry, a form she would repeatedly turn to during her own poetic career.  Writing that O’Shaughnessy is well suited to lyric poetry, and that his shorter lyrics are distinguished by “spontaneity of feeling, grace of diction, and an aerial delicacy of rhythm,” Blind observes that the keynote of his verse is best expressed by the German word Sehnsucht (yearning or longing), “the passionate aspiration for something afar and above, which finds its symbol in nature in the receding azure of hills in spring, or the tremulous haze of fading horizons.” For more on O’Shaughnessy, see Jordan Kistler’s Arthur O’Shaughnessy, A Pre-Raphaelite Poet in the British Museum (Routledge, 2016).]

There is a beautiful old legend, narrating how the child Jesus used to form sparrows of the mud, by the wayside, which flew away singing as he clapped his hands. This feat is not unlike the lyrical poet’s, should he succeed in winging his words by breathing into them the soul of music. Nothing, at first sight, appears more eminently natural, indeed, than the song proper, the lyrical cry as it has been called. Yet owing to the complete spontaneity of inspiration requisite for its production, we not only find that few poets, comparatively speaking, have been absolute masters in that species of composition, but also that even those who were masters have only occasionally succeeded in producing lyrics of consummate excellence. The very simplicity of the song, whose themes essentially consist of what is primal and universal in the fate and feelings of man, renders complete success in it so difficult of achievement. Of course it may again be subdivided into many varieties, whose character always consists, however, in the fact that they form a sort of simple musical accompaniment to the vicissitudes of human life, its range thus extending from the lullaby over the cradle, of which Tennyson’s “Sweet and low, sweet and low,” is probably the most perfect specimen in English, to the last pathetic wail of the dirge which but implores the “quiet consummation” of the grave. Thus it is but natural that we shall find a certain similarity of tone and manner in the most perfect models of lyrical poetry, a similarity considerably modified, however, on the one side by individual diversities of character, on the other by the periodic growth of new schools of poetry.

If we have dwelt for a moment on the peculiar nature of the difficulties and excellences proper to the genuine song, it is because Mr. O’Shaughnessy appears to us particularly happy in this species of composition; his shorter lyrics being eminently distinguished by spontaneity of feeling, grace of diction, and an aerial delicacy of rhythm. In proof of the exquisite musicalness of the poet’s endowment let us quote the following beautiful verses:—

Has summer come without the rose,
Or left the bird behind?
Is the blue changed above thee,
O world! Or am I blind?
Will you change every flower that grows,
Or only change this spot,
Where she who said, I love thee,
Now says, I love thee not?

The sky seemed true above thee,
The rose true on the tree;
The bird seemed true the summer through,
But all proved false to me:
World, is there one good thing in you,
Life, love, or death—or what?
Since lips that sang, I love thee,
Have said I love thee not?

I think the sun’s kiss will scarce fall
Into one flower’s gold cup;
I think the bird will miss me,
And give the summer up.
O sweet place! desolate in tall,
Wild grass, have you forgot
How her lips loved to kiss me,
Now that they kiss me not?

Be false or fair above me,
Come back with any face,
Summer!—do I care what you do?
You cannot change one place—
The grass, the leaves, the earth, the dew,
The grave I make the spot—
Here, where she used to love me,
Here, where she loves me not.

This is but one of several songs equally noticeable for their sweet ease of rhythm and subtle grace of sentiment. As particularly fine in this respect we would call the reader’s attention to the lyrics beginning:—“I made another garden yes,” “She has gone wandering, wandering away,” “Now I am on the earth,” “I went to her who loveth me no more,” &c. Charmingly quaint is the poem entitled “Prophetic Birds,” in which the latter are imagined singing on a May morning in a wood which two lovers have made their trysting-place. We cannot refrain from quoting the two following stanzas:—

“Sure,” said the thrush, “we’ll wed them soon,”
“Yea,” said the turtle-dove, “in June;”
“They’ll make fine sport ere the year is out,”
Said the magpie between a laugh and a shout.
And heedlessly the lovers heard
The senseless babble of bird with bird.
“Sure,” croaked the jackdaw, “in July
They’ll quarrel, or no daw am I—
Why let them, since they are but men,”
“They can make it up though, quoth the wren.
And heedlessly the lovers heard
A senseless babble of bird with bird.

Even from a few specimens like the above the reader will be able to judge of the exquisite finish of the workmanship. In many senses Mr. O’Shaughnessy is indeed a master of the formal art of poetry; there is a peculiar flavor of individuality about the ring and flow of his verses, which are original without being far-fetched, and seem to set themselves to a music of their own as one peruses them; a music too that is full of a subtle play and transition of sound very rare and consequently eminently precious where it exists.

The leading phrase of Mr. O’Shaughnessy’s poems, . . . is scarcely to be expressed . . . by any word but that significant German one of “Sehnsucht;” the passionate aspiration to something afar and above, which finds its symbol in nature in the receding azure of hills in spring, or the tremulous haze of fading horizons.

The leading phrase of Mr. O’Shaughnessy’s poems, so to speak, is scarcely to be expressed adequately by any word but that significant German one of “Sehnsucht”; the passionate aspiration to something afar and above, which finds its symbol in nature in the receding azure of hills in spring, or the tremulous haze of fading horizons. That plaintive minor which is so expressive of the discrepancy, the profound incongruity, between life and the ideal, forms the key-note of all Mr. O’Shaughnessy’s work. It is, perhaps, strange that we should nowhere be able to trace an attempt at the solution of the problem, except it be in the poems entitled “Europe” and “Ode to a New Age,” which bear, however, too evident traces of a Swinburnian influence. Peculiarly inspired, on the other hand, by this sense of loss, this home-sickness in a bleak materialistic world, this brooding glow of mystic passion, are the poems “The song of Betrothal,” “Outcry,” “Nostalgia des Cieux,” “Azure Islands,” and “Music and Moonlight.” The conception of this latter poem, which gives its name to the book, is extremely poetical; Music, as personified from the point of view of a spiritual force, liberating and redeeming us from this sense of want, this [321] superincumbent weight of custom; the rapture of a gifted musician transported out of herself by the entrancing creation of a Chopin; the keen, tense-strung fervor of ideal passion; the final snapping of a string in the instrument, and of a string, too, in that other instrument, the beautiful Lady Eucharis, who has sat playing alone in the moonlight chamber of her stately house, and is found there in the morning as one having fallen asleep—dead. All this is profoundly felt and full of fine imaginative qualities. It is deficient, on the other hand, in a certain massing of effects; the result being too often a confused brilliancy and sense of satiety, partly due to indefiniteness of outline, partly to a glut of such expressions as “amber water,” glittering opal,” “soft illumination,” “gleaming amethyst,” &c.

We must still advert to the hymn-like poem, “The Earth,” which in form resembles the unrhymed verse of the Bible; a poetical style resuscitated by Walt Whitman, and destined, we believe, to have a magnificent future. As regards the spirit, however, it proceeds from the profoundest springs of the poet’s individuality, and we should pronounce it the most powerful, touching, and eminently sincere of his productions. The following extract, however inadequate, may serve as a specimen of its style:—

It is wonderful that I never preferred the thought of you before, O still, mysterious, unalterable earth!

It is wonderful that I never longed to know you, to feel you, to become one with you; that I never had strange revelations of you in dreams; that I never stopped loving, or thinking, or speaking, or singing, to consider about and understand you;

It is most wonderful that I never stopped suffering to think how undisturbed, and changeless, and full of rest is the earth out of which I came, and to which I shall one day return.

In conclusion, we will only remark that the present volume is sure to add Mr. O’Shaughnessy’s reputation, and that, by its many beauties of versification, style, and genuine poetic feeling, it cannot fail to charm a wide circle of admirers.