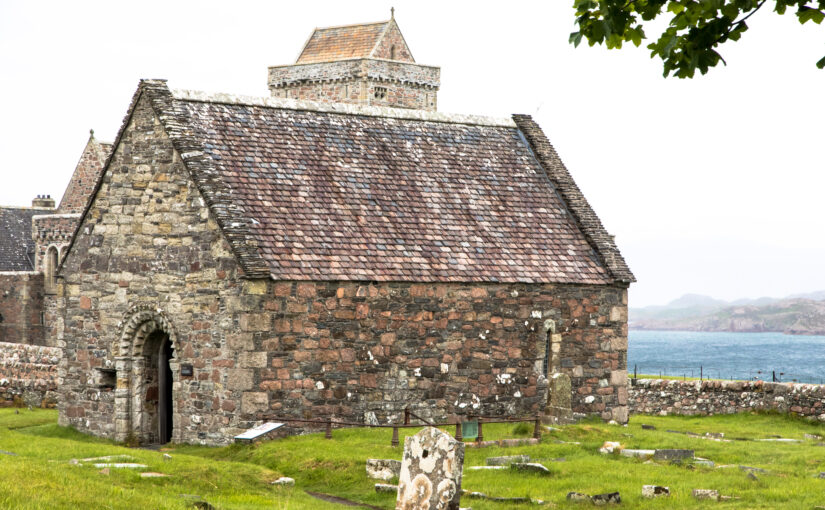 [NOTE: the letter quoted here from Mathilde Blind to Richard Garnett comes from the British Library’s manuscript collection, titled Correspondence and Papers, 1866–1896,catalogued as Additional Manuscripts, volume 61927. The first part of the letter describes Blind’s visit to Fingal’s Cave on the uninhabited island of Staffa; this section relays her impressions of Iona, which inspired the title poem of her 1881 volume The Prophecy of St. Oran and Other Poems . All photographs on this page were taken on 26 June 2016 by James Diedrick]

. . . From Staffa we proceeded to Iona—“The Blessed Islands”—and what a contrast are its low grass-green shores and its little caves of silver sand to the desolate grandness of Staffa. After passing so many swarth rocks and sullen shores it is quite a relief to see these few homely fields smiling amid the ocean, these humble huts nestling by the sea-shore. And the Cathedral that rears its grey towers on this sea-girt island touches the heart with a deeper pathos than the grandest structures in Europe.

—Here every stone, every mouldering crop speaks of St. Columba and his devoted little band, and whatever of truth and beauty was contained in Christianity forces itself on the imagination in this lonely spot with whose soil is mingled the dust of these ardent and heroic men.—I should be inclined to call Iona the island of the Dead, for every inch of ground you tread upon almost is marked by a grave. Tombs of Kings and chieftains, some defaced by time, some ornamented by sculptured figures lie here in rows with the green grass growing between them. Forty Scottish kings are said to have been buried here, besides princes of many other nations, on account of a Gaelic prophecy according to which a deluge was to drown all the nations.

The Gaelic prophecy Blind here refers to is contained in Staffa and Iona Described and Illustrated by W. Keddie (Glasgow: Blackie & Son, 1850), which she likely carried with her on her travels. She quotes the lines from the prophecy quoted on p, 68:

“The sea at one tide shall cover Ireland
And the green-headed Islay,
but Columba’s Isle
Shall swim above the flood.”

Blind was also struck by the Celtic crosses that stand near the cathedral:

Now and then you come upon a tall cross, one being as much as fourteen feet in height, and beautifully carved. The thick grey lichen with which they were partly covered enhanced the solemnity of this appearance. I was sorry to leave Iona I should have liked to have lingered some days amid its ruins and tombstones. (Blind ALS to Garnett, 26 September 1873, Add. MS 61927, ff. 224-28).

The cathedral with a Celtic cross near the entrance

Blind’s visit to Iona inspired the title poem of the first volume of verse she published under her own name, “The Prophecy of St. Oran” (1881), a four-part, 148-stanza narrative based on the legend of the sixth-century monk who consented to be buried alive in order to appease certain demons of the earth who were preventing the Christian missionary St. Columba from building a chapel on Iona. 1 When St. Columba ordered the body to be dug up after three days, Oran arose from the dead to proclaim that there is no God, final judgment, or future state. St. Columba silenced Oran by ordering his body to be buried once again, a command which subsequently became the Gaelic proverb used as the epigraph to Blind’s poem: “Earth, earth on the mouth of Oran, that he may blab no more.” In Blind’s revisions to the legend, Oran falls in love with the daughter of a native chieftain, Mona, whose proud paganism resists his attempts to convert her. In addition, he is condemned to burial by St. Columba rather than offering himself as a sacrifice. Finally, it is his beloved Mona who releases him from the grave, not some supernatural agency.

The entire poem may be read as Blind’s poetic representation of what St. Oran might have said if allowed to continue speaking after rising from the earth, filtered through her own feminist, freethinking perspective. The final words St. Oran speaks in the poem express Blind’s fervent antitheism and feminism: “Cast down the crucifix, take up the plough! / Nor waste your breath which is the life in prayer! / Dare to be men, and break your impious vow, / Nor fly from woman as the devil’s snare! / For if within, around, beneath, above / There is a living God, that God is Love.” By telling a story set in the early medieval past, Blind simultaneously defamiliarizes Christianity, represents it as historically contingent, and prophesies a post-Christian world of liberated desire. Her antitheism here echoes the humanist vision with which her friend, the University of London mathematician and philosopher W.K. Clifford concluded his 1879 lecture “The Ethics of Religion”: “The dim and shadowy outlines of the superhuman deity fade slowly away from before us; and . . . we perceive with greater and greater clearness the shape of a yet grander and nobler figure—of Him who made all Gods and shall unmake them. From the dim dawn of history, and from the inmost depth of every soul, the face of our father Man looks out upon us with the fire of eternal youth in his eyes, and says, “‘Before Jehovah was, I am!'” (The Ethics of Belief and Other Essays. The Thinker’s Library. Vol. 111 (London: Watts, 1947), p. 121).